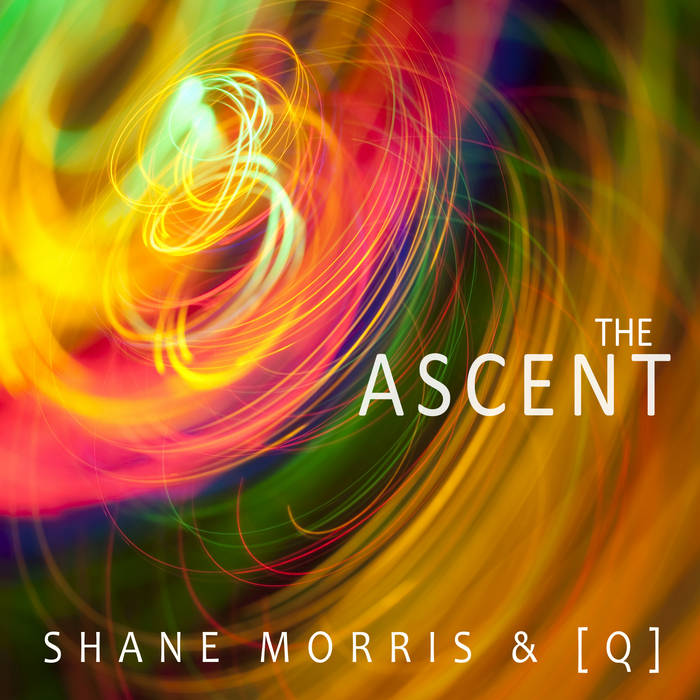 "The Ascent" is a sequel to "The Descent" (2011) by Shane Morris and [Q] which continues the exploration of abstract electronicism and experimental chaos systems, inspired by the writings of Charles Darwin.
The album was originally composed in 2012, but has gone through many revisions until the final release.
"The Ascent" is partially posthumous. [Q] past away near the final stages of the album in 2012.

Below is an account I have written of our process, collaboration, and friendship.

"I have made so many wonderful friends through IRC and later social media on the net. There was a period of time before Arielle was born that I think of as an online musical renaissance for me personally. I would often spend 10 hours a day composing, recording, experimenting, and probably most importantly communicating with other musicians around the world on a million different topics. What I used to do in bars and clubs with other musicians locally and regionally, I was now able to do online with anyone in the world.

One of those musicians that I spoke with frequently was a man named John Fox that lived in a small town in the U.K. He would sometimes play and record music under the name [Q]. One of the first things I noticed about John was his unique approach to sound and music. He had a fondness for space and long intervals, simplicity, but also complex harmonies. We both shared a love for randomness in music, but John liked to take that further than me. John would often do live performances online without announcing it to anyone. He enjoyed the fact that it was a very small concert that was only available to the people that happened to be passing by at the time. For all the prep work that I would put into my own performances, this just kinda blew my mind. He had such a dedication to sound, chaos, and randomness that was impossible to not be inspired by it.

John and I became good friends. He had some learning disabilities and a health issue that often held him back from communicating with too many people. John felt very comfortable with me because I was working at the time with students In public schools with learning disabilities. John had dyslexia which caused him some social strife at times throughout his life, but never held his intelligence back. In fact the isolation I believe made him much smarter in other areas. John was also terminally ill with COPD. We also bonded over this disease because my Father had died from it 15 years previous and John was comfortable to talk with me about it. I believe I may have been one of the only persons he spoke to about it. He was a very private person with no family. He was retired and would often spend time in the city park feeding the birds and enjoying nature, when he wasn't pursuing one of his many intellectual activities.

On November 4th, 2011 we released “The Descent” on Treetrunk Records. It is a single long-form piece of deeply abstract and experimental music inspired by Charles Darwin and his writings on evolution. The album was released with a Creative Commons license and has received some nice praise over the years.
The next year, John purposed a new collaboration using some software that he put together in Pure Data. He requested I send him long samples of synths and percussion that he would then reprocess with his system. John would would then send the processed materials back to me for composing the final tracks. It was a refreshing approach to composition and I was always surprised by what John would send back to me.

By late 2012 I was extremely busy finishing up several music projects and figuring out my new role as a stay home Dad. John and I were putting the final touches on the new album but we hadn't been talking as much. In November, I told him I was too busy at the time to finalize the album, but I would over the next couple months. He wrote back promptly with this reply, “Hi Shane, good to hear from you and it is great that Arielle is at such an exciting time in her life and you are there to enjoy it. I'm looking forward to seeing her first paintings.. ;) Please do not worry about the project.. there is no time limit to it :) At the moment I am trying to learn to read and write Hiragana.. Cheers, john.”

I wrote him back a few weeks later in December and did not receive a response. After a couple days I knew something was amiss. After a week, I suspected the worst. I only knew John by words. I had never seen a photo of him. I wasn't even too sure where he lived. We were just pure friends. Not corrupted by or influenced by anything outside of thoughts and words. I always loved that about our friendship. Unfortunately, that also made it impossible to track him down. Together with another friend in the EU, we started looking for obituaries across the UK. We were unsuccessful at tracking down anything. I knew in my heart after a week had transpired without hearing from him, that he had died.

However, just to be safe I decided to wait a while just to see if it was something else. I waited one year. Two years. Three years... and now in the fourth year, I have not heard back from John. I didn't expect to though. I knew he had passed away. I don't believe he knew it was coming, though I can never know for sure. I believe he practiced randomness on many levels in his life, not just in music. So I have often wondered if his death was just another act of randomness on his part, that is... not announcing the end to me or anyone else. He was terminally ill so he was always aware of the possibility. I think it is most inspiring that he was blazing ahead intellectually all the way to the end and still trying and learning new things, like this album with me and learning Hiragana in his last month of life.

In those four years, I have totally reworked this album and expanded on it and tried to make it the best that I could. I would work on it for a while, then it would become too emotional for me to continue. At times I didn't think I would release it, but then I would remember John saying he hoped I would put it out. So tomorrow I will release “The Ascent” by Shane Morris and [Q] at my bandcamp page, a new album as well as a farewell to a good friend. We hope you will enjoy it!" - Shane Morris

Text: The Descent of Man Part 1, by Charles Darwin, Chapter 7, On the Races of Man, Part 1 [Public Domain]